When the NOW! team approached us in 2019 with their plans, we were struck by the boldness of their ambition. Founders Colombe Cahen-Salvador and Andrea Venzon planned to launch a new movement that would push for humanity to work as one to solve the biggest challenges of our time.

Through a focus on transnational, collective action, they aimed to unite people across borders and political lines to bring about simultaneous and radical change - on issues ranging from climate action and women’s rights to fiscal justice.

The brand we developed with NOW! uses a colour palette of coral red and indigo, to simultaneously convey a potent mix of energy and dynamism with justice, integrity and sincerity.

The use of a simple, versatile logo centred on a spinning loop, composed of two halves and forming the letter “O” in NOW!, implies togetherness and strength, while the faded tails of each piece in the loop show movement, disruptiveness and impact, core elements of NOW!’s identity.

The spinning loop yet recognisable icon to frame NOW’s issue-based campaigns in a manner consistent with their vision.

The website we created for NOW! was achieved in stages, allowing Colombe and Andrea to kickstart the movement quickly, then build on their early success.

During the first phase a simple, clear and gripping landing page was delivered in mid-October 2019 to explain NOW!’s vision, recruit members, and to raise funds to enable a full launch. By December, their pre-launch goal of €40,0000 was reached, and thousands of supporters from across the globe had become members.

This supported the development of an extended website, that was designed and built to represent the dynamism of the movement, and to lead supporters to action. Despite all the fun of the festive season, we were able to launch NOW!’s new website smoothly on 1 January 2020, to coincide with the movement’s official launch. 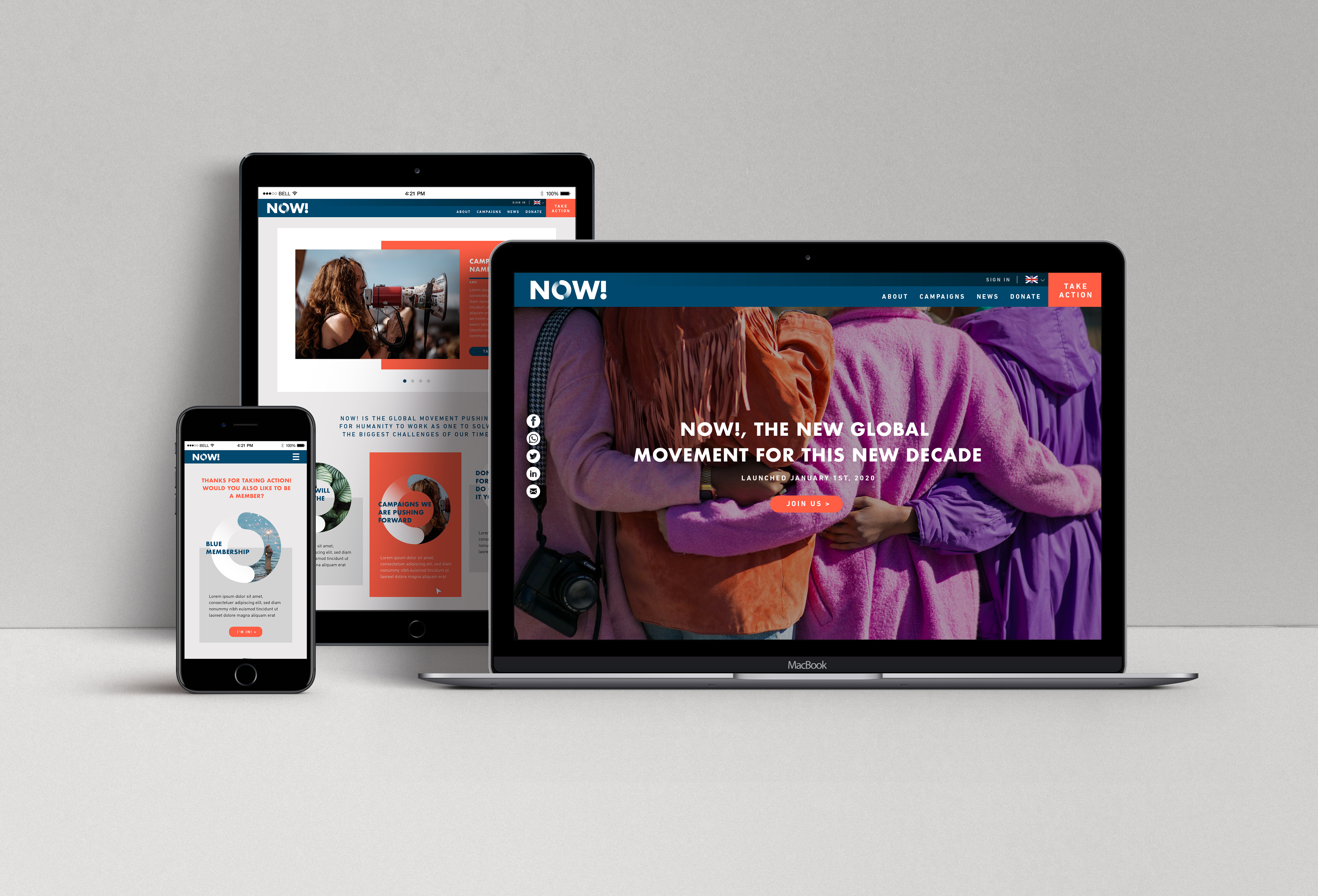 Building a global movement through SupporterBase

Since launching NOW!, Colombe and Andrea have worked hard to grow their network of international supporters and demonstrate meaningful progress, including by running early campaign actions targeting decision-makers, and keeping supporters informed through regular communications.

But building a transnational movement to campaign on a range of pressing global issues is no small task. In order to grow the movement quickly, and in a way that would be sustainable over time, the team needed to empower committed supporters to act on behalf of NOW! Since December 2019, they have been using SupporterBase to do just that.

SupporterBase helps progressive campaigners distribute organizing responsibility to a network of committed local volunteers. It allows volunteer leaders to organize events, filter, call, email and SMS members of their local group (including via call lists, email and SMS blasts). In this way it gives volunteers a greater level of autonomy, and control over the tactics they think would work best within their particular context. It does so while adhering to strict privacy and security requirements including GDPR compliance, and while providing organizational staff with oversight of activity across the network, through an intuitive set of permission sets.

By the end of February 2020, NOW! had established around 40 supporter groups spanning more than 15 diverse countries - from the UK, Italy and Poland, to Singapore, the US and Costa Rica - all of them led by local volunteer leaders using SupporterBase. This ever expanding network of groups will play a key role in NOW!’s organizing strategy, helping to run local workshops and events (NB: albeit virtually during Coronavirus lockdowns for now), discuss solutions with their community, and engage with the local policy making process.

Why Environment Victoria chose SupporterBase to power their volunteer network

SupporterBase - taking the hassle out of distributed organising